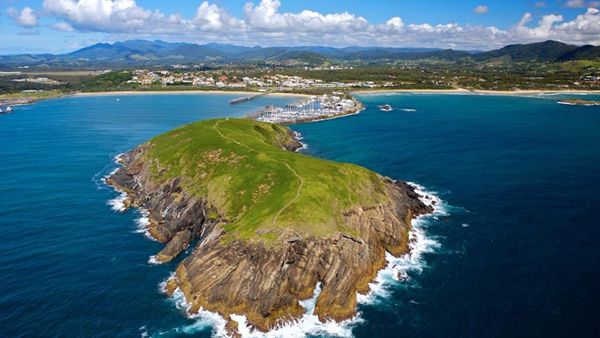 When holidaying in Coffs Harbour, its almost essential to take walk up Mutton Bird Island to take in the views. Certainly one of the best spots to see whales during the migration season or take in a sunrise over the Marina. Don’t like getting up early, that’s fine as the sunsets look brilliant from the top of the Island looking back over the Jetty and Marina. One of the best spots to grab your classic Coffs Harbour photo.

The island is home to thousands of wedge-tailed Shearwaters, so called for their ability to cut or shear the water with their wings as they skim across the surface. Early settlers called them Muttonbirds because of their fatty mutton-like flesh. The birds spend the Australian winter in southeast Asia, travelling back to Muttonbird Island in August each year. Amazingly, the birds return to the same burrow every year. A pair of birds share the responsibility of keeping one single egg warm and then share the raising of their chick. During the day they forage for food and return to their burrow just after dusk. They depart on their annual migration in late April every year.

Muttonbird Island is a sacred and significant site to the local Gumbaynggirr Aboriginal people, who call the island Giidany Miirlarl, meaning moon sacred place. The moon is the island’s protector, guarding the muttonbirds as a food source and protecting them from over-harvesting. The island was also a ceremonial site.

If all that isn’t enough, its also a popular fitness route for locals with a leisurely walk along the break wall that connects the island to the mainland leading up to the base of the island before the short but steep incline begins on the path to the look out on the top.

Smugglers On The Beach